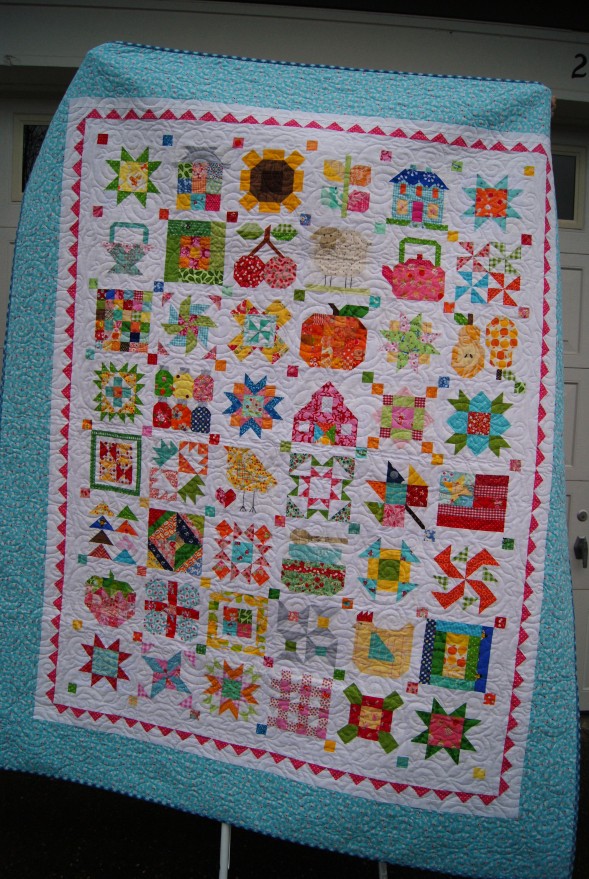 April 4, 2015…almost five years ago.  That was the day I sewed up my first Farm Girl Vintage quilt block. I was three and a half weeks post-op from my back surgery; still in A LOT of pain, but knowing that I needed to get my butt out of bed somehow so I could regain strength and avoid any additional atrophy.  I decided to hold out the carrot of sewing, something I generally didn’t have a lot of time for in my pre-back injury days, to entice me to work through the pain.  Farm Girl Vintage had just been published, the sew along announced, and I wanted to tag along.  I didn’t have a whole lot of experience with making actual quilt blocks—I’d done a lot of English Paper Piecing, some string quilting, and some basic square patchwork up to that point—but I told myself I’d figure it out as I went along.

When I first looked at the specs for making the Wooly Sheep block that day, I almost shelved the book and walked away.  There were twenty-three separate pieces to cut to make that one block, an astronomical number to my newbie quilter mind.  I actually don’t know why I decided to go forward; it spooked me so bad, and I know what my usual response to that kind of shock was at that time…and it was NOT to go forward with it!  However, for whatever forgotten reason, I decided to give it a try.

It took about three hours to make that block, and I remember pinning it on my corkboard and sitting back to look at it and thinking, “I made that, and it looks like the picture in the book!”  I was absolutely chuffed. And, because I had made that one block, I knew I could continue and make all the other blocks in the book.  It was my reason to get out of bed during those months of physical therapy and non-stop pain: If I got through my exercises, I could make a quilt block that day.  Each block also carried the bonus of being able to post its finish on Instagram and then reading through nice comments from my friends.

I didn’t complete the sew along on time because I ended up getting a stress fracture in my foot from being too gung-ho about my physical therapy walks, and then I joined a year-long sewing bee and it was the Year of All the Baby Quilts, so I didn’t actually come back to finish the Farm Girl Vintage blocks until two years later. I finished up the remaining blocks by August of 2017, and then I have no notes about it at all until an Instagram post in March 2018 where I said it only needed its binding. But, my husband was looking for work and we ended up moving a few states away that year, so it sat in a box until just a little while ago when I went on a mad UFO-finishing spree and rediscovered it.  So here we are, two (in total, five) years later, and it is finally complete!

Knowing what I know now about quilting, I was so not ready for this quilt…and yet, it worked out.  There’s a couple of blocks in there that are quite bad (namely, the House and the Canning Jars), but I learned the necessary lessons from them and didn’t make those mistakes again, so the rest of the blocks are fine.  When I come across those particular blocks while I’m sitting under it, I smile and pat them, remembering how frustrated I was with them—and then I’m grateful I pushed on despite my imperfect results.

Don’t wait to make the quilts you want to make!  I had to re-do a number of these seams because they came out insane on the first try, but that’s the awesome thing about sewing: You can almost always rip out a seam and give it another try.  You don’t have to start over (usually), and even if you do, you can usually use the first “failure” block in a different project.  Really, the only true setback is if you run out of a particular fabric, and most of the time you can just buy some more.  Annoyed with yourself that you might be about having to do that, it’s not the end of the world.  (And trust me, just about EVERYONE who makes quilts has had to do that at some point!) 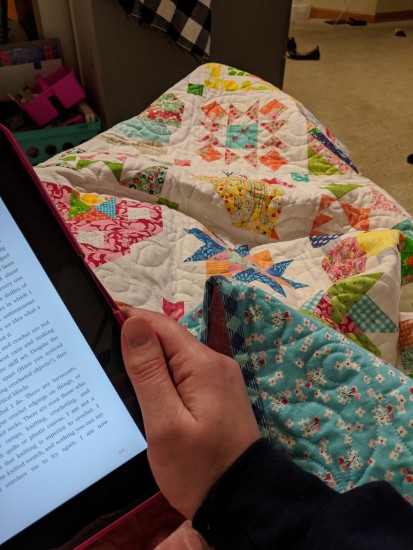 I watch new quilters fret about making mistakes, and place limits on themselves and deny themselves the projects that their hearts truly want to make, but you don’t have to do that!  Google tutorials about that kind of pattern, watch YouTube videos about it, read blog posts about beginner quilting tips, but above all, start sewing! And start sewing something you’re going to love!  Who cares if some of the seams are jaggedy?  Who cares if your color choices make you cringe later on?  Guess what?  You’ll learn the lesson and do better on the next one…because there’s always a “next” quilt.

It sits on the big red chair in my craft room and I snuggle underneath it as I read or do some hand sewing.  I’ve banned everyone in this house from ever using it on their beds because this quilt is MINE.  I cut my baby quilter teeth on this quilt.  I will be buried with this quilt.