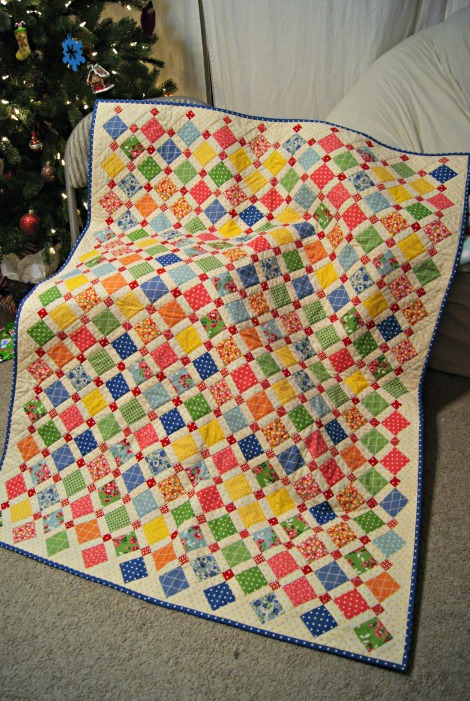 My roommate from freshman year of college just had her first baby, the third of my close friends from freshman year to procreate this year.  We’ve stayed in touch over the years; she’ll randomly send me a little email here and there and they just brighten my day so much.  She’s always been one of the nicest people I know.

So, of course, when she emailed me early on in the year to let me know that she was expecting, I wanted to go all out for her and her wee one.  I had plenty of notice, so I really sat down and thought about what to make.  I recalled a quilt pattern I’d seen in a book I borrowed from the library while we were living in Australia, and luckily, I remembered the name of the book, Two From One Jelly Roll Quilts, by Pam and Nicky Lintott, and even more luckily, the book was available on Amazon.com (so many Australian books cannot be obtained stateside, but this one was British!), so I ordered it, took a glance at the pattern, chuckled at its cleverness, and committed.

Her nursery has been decorated with an alphabet and storybook theme, and she said she was fond of polka dots, and then she found out she was having a girl, and the Bread & Butter fabric collection popped into my mind’s eye, and I knew we had a winner.

I’ve been in a lot of pain for the past couple of months so progress on this quilt was very slow.  It was decided that I would have another surgery to help with the problem, and when I finally got a surgery date scheduled, I just had a feeling that I really needed to get this to the binding stage before I went under the knife.  I had to enlist the help of my bestie, Denise, to cheer me on and encourage me, and we hosted a couple weeks’ worth of “Epic Sewing Thursdays” where we’d text pictures back and forth to each other every hour or so to show our progress on our respective projects.  You sure can get a lot done when you’re working “alongside” friends!

My check-in for surgery was at 12:45pm on Election Tuesday, and I was finishing up the machine-stitching portion of the binding at 10:30am.  Why fret about surgery and politics when you can focus on making pretty things for babies?

The hand binding took two days, and the quilt label took lots of minutes over lots of days because my surgery ended up being a little more invasive than originally planned, and I was put on bed rest for five weeks instead of “three days of resting” afterwards.  Bah.  (Which is also why you’re getting quilt photos in front of the Christmas Tree…I wasn’t allowed to leave the house, ha ha.) 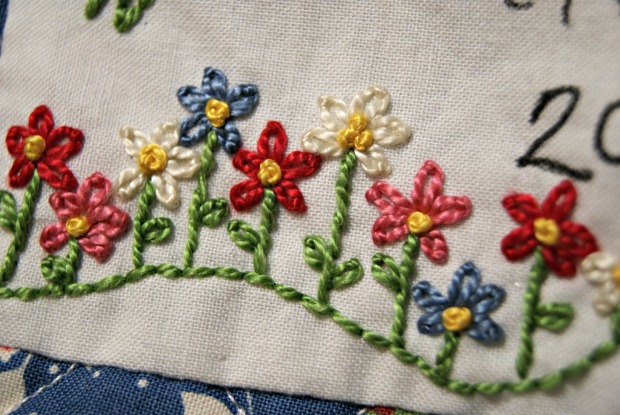 Congratulations, Stephanie and Jon, on the start of your family.  Welcome to your life, Baby Sydney…look to your mother’s example and you’ll do well. 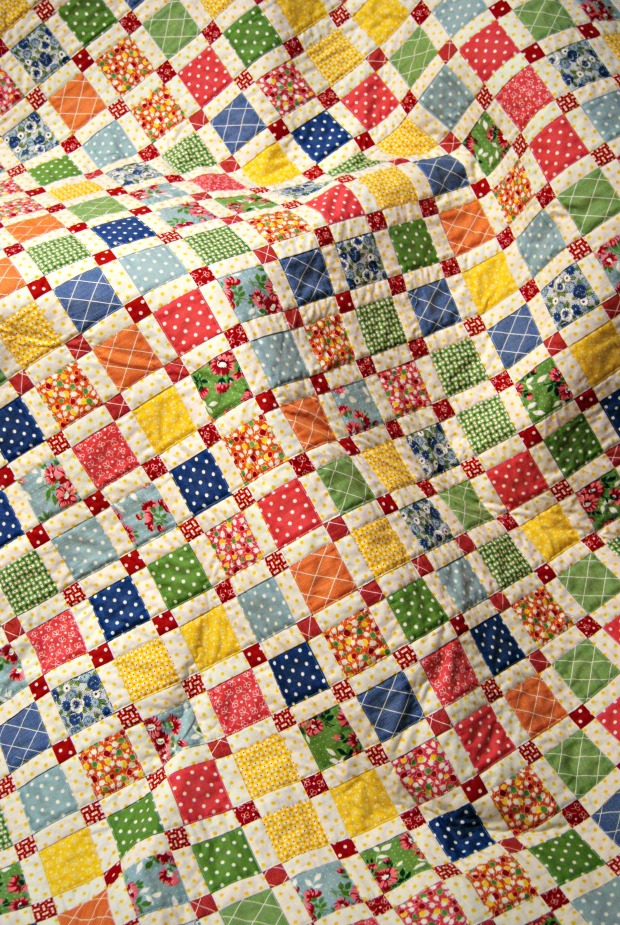 If you’ve been following me on Instagram (@thatcraftycara), you saw my announcement a few weeks ago that I was asked to be a “Fabric Ambassador” for Calico Cat Fabrics.  My first “assignment” arrived a few days after the announcement:  a rollie pollie of the “Forget Me Not” fabric collection by Sue Daley and made by Penny Rose fabrics.

My knee jerk idea for the fabric was to add a little red and go the patriotic route, but I knew I couldn’t get something made up fast enough for the approaching Fourth of July weekend, so I didn’t want to spend my time making something that would then sit in a box for a year.

So I sat that little roll of fabric on my cutting table and we had a showdown.

Exasperated, I went to bed.

But the next morning…ah, dear readers, the power of the early morning walk.  I had too many ideas, and I eventually had an epiphany regarding how to deal with these cuts of fabric that will be making their way to me:  Forget that it’s an assignment and act like it’s a gift.  THEN make something that I’d want to make, rather than what I thought others wanted me to make.  I mean, I was selected for the role based upon the things I was making for my own amusement, so it’d probably work out well to keep up with how I was already doing things, right?

I asked myself what I would make if no one was ever going to see that roll of fabric ever again, and a vision flashed through my mind.  The blues of the fabric collection made for a good snow-themed project.  Never mind that it was June, the fabric wanted to be used for wintertime purposes.  So I listened to the fabric, paired it with a fat quarter of white-on-white snowflake print, found a quilt block with a large chunk of negative space in its center (“Star and Chains” from The Quilter’s Cache), and plunged forward. 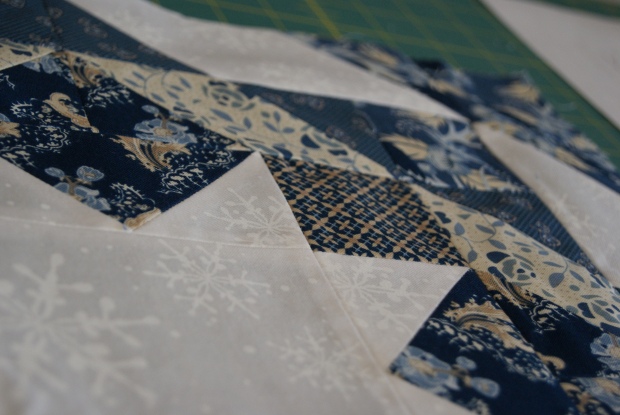 I’d seen mentions of “trapunto” quilting, or “stuffed quilting,” in random corners of the blogosphere, and I’d always thought it was pretty, and I thought the technique would make for some extra prettiness on this particular project.  It wasn’t hard at all, and I’m totally planning on using this technique to beef up some of my future quilting projects!

I chose a simple snowflake shape for the trapunto portion of the pillow: 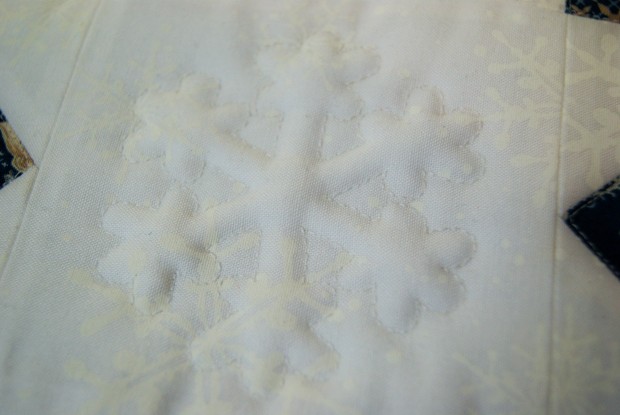 This pillow used five of the fabric strips from the roll, leaving sixteen left over, so I have a second project in the works using up the other sixteen strips.  I thought I’d make a second pillow at first, but I’d used up most of the dark strips on this pillow alone, and I didn’t want a pillow with less contrast.  So, I’m dusting off a pattern I’ve had my eye on for a year and giving it a go with the leftovers.  Two projects from one little rollie pollie!

Thank you so much, Calico Cat Fabrics, for allowing me the opportunity to work with you and to stretch my creative muscles a bit.  I’m looking forward to our future projects together!

And, yes, I’m writing up a tutorial about trapunto quilting that I hope to share with you next week!  See you then!

Linking up with:
Link a Finish Friday @ Richard and Tanya Quilts
Can I Get a Whoop Whoop? @ Confessions of a Fabric Addict
Let’s Bee Social @ Sew Fresh Quilts

Happy 11th birthday to my baby boy! 🥳🥳🥳 He had lots of fun being ten, especially given that it was during a pandemic, but we're hoping eleven will be a much more happening year for him! 🤞🏻🤞🏻🤞🏻😆
[blog post] The next project: A birthday dress for ME, from this awesome lavender stalk voile. (Wow, it's almost like I had a reason to finally finish my purple Echo Flowers Shawl...🤔)
Renaissance makes the cutest cupcakes. 😍😍😍
Nothing like blocked lace...😍😍😍