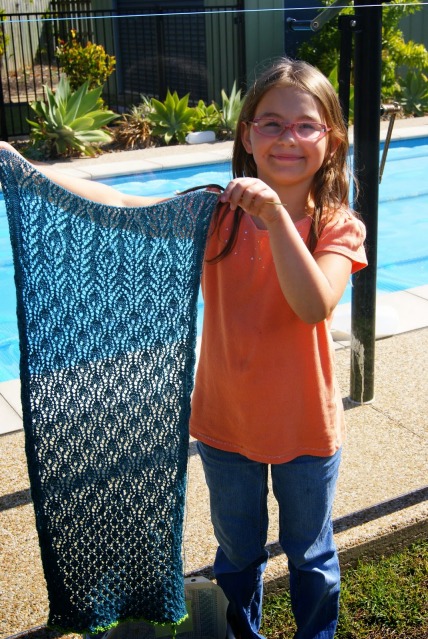 It’s already been a month since I last showed you some Peacock progress!  What?!  I’m quite certain it was only two weeks ago, but the blog doesn’t lie.  Time is flying.

So here it is, after three months of consistent attention.  I am finished with all but the last chart, and when that’s done I’ll pick it up and start all over again for the second half.  I’m pretty pleased with myself right now.  Slow and steady, slow and steady.  I don’t think people tend to use those words to describe my crafting, but they have to now, mwa ha ha ha.  Expectations, shattered.  Lookee me, I’m, like, responsible and stuff.

Isn’t Penguin so cute?  She was super happy to help “model” the stole for its photo shoot.  Her missing teeth on the sides of her two front teeth crack me up.  Growing girl.

I’ve reached the point where I am getting kind of tired of this project, so there’s no magical progress moments where I feel like knitting any extra beyond my daily amount scheduled.  However, I’m ridiculously pleased with the fact that this thing is growing, so I just keep knitting my pittance of rows five days a week and then rejoice over the stole’s progress.  Isn’t it funny how you can be absolutely psyched about something, but really not look forward to the work you have to do to make the cool thing happen?  I guess that’s what we call laziness, and it explains a lot of the problems we have in the world from time to time. 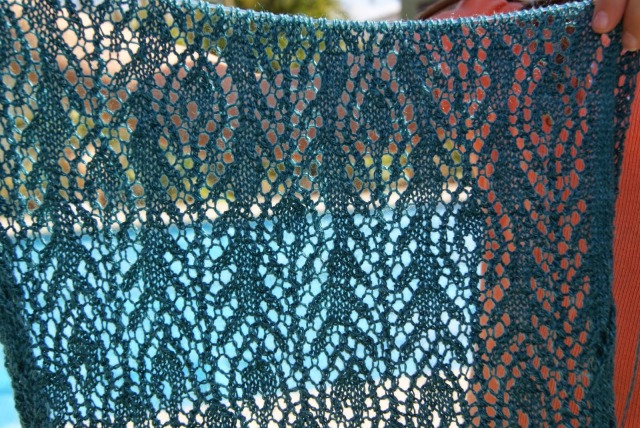 This section is brought to you courtesy of the month of October.

I’ve scheduled some time off from this in November, after I finish the first half.  When I put that break in the schedule, I wondered if it was wise, but now that I’m approaching the midway point, I’m so glad that I gave myself some time off guilt-free.  Just a week or two, but it will be needed.

Yay for slow and steady!

One thought on “Peacock Pride”