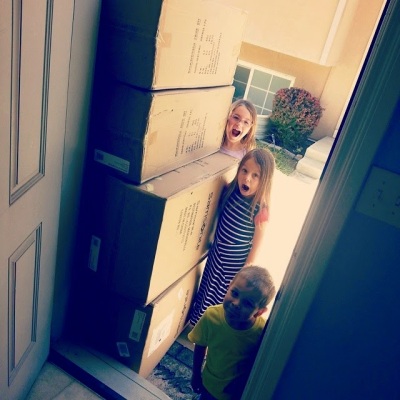 I fell victim to a little pre-moving anxiety last week, as showcased by last week’s post.  This week I’m in a far better frame of mind, now that we have visas, plane tickets and hotel reservations for all phases of the big trip.  THANK YOU so much for your “fast visas” prayers–it normally takes at least two weeks to get visas, ours came in less than a week.  Prayer works, period.  Thank you so much.

So yes, this is really going to happen!  I’ve waited for some email to arrive all this time saying, “Sorry, we changed our minds,” and it never materialized.  I’ve now re-focused that worry onto more productive areas, and we’re moving along at a snail’s pace in regards to packing, cleaning, and tying up loose ends.  (FYI–kind of a pain in the neck to get six months’ worth of prescriptions filled at once!)  As evidenced by this darling photo, our luggage arrived yesterday, and the kids found the event rather impressive.  I had a mini heart attack when I opened my door and found it partially blocked by the boxes, but I recovered quickly.  God bless our UPS delivery man…we’ve put him to work these past few weeks!

One of the nice things about all this prep is that I’m having to do a lot of waiting in random offices and other places, which grants me extra time to work on Junebug’s “Star Spangled Diamonds” quilt.  I’ve completed ten full diamond units, which means I’m about 1/7 done with the piecing.

It looks like I started working on this on May 20, so I’ve averaging five a month.  At that rate I should finish piecing this up in August 2015.  Hmm.  Oh well, the time will pass anyway, and I’d like to have a gorgeous quilt mostly pieced next August, rather than nothing.  Then there will be assembly, quilting, binding…I don’t see this particular quilt reaching its finish until January 2016 or thereabouts.  But it will be BEAUTIFUL and totally worth the time.

My knitting mojo has been returning, thank goodness, and I’ve put a little work into a few projects, and started THE project, my “unicorn” project that has kicked my butt three times over the past five years.  I’m going to take it easy, only allow myself a certain number of rows per week, and if it sticks this time, I should finish it up in March.  It’s a teeny little strip of knitting at the moment, so I’ll wait for something more impressive to show you a picture of in the coming weeks.  (I get a little jealous of the full-time crafters sometimes…a full workday to work on creative pursuits?  It’s almost enough to make me think about sending the kids to school…oh, how fun that would be!)

And then there’s the packing, of course.  Always.  🙂

By this time two weeks from now, we should be on the other side of the world.  That is weird to say.

4 thoughts on “What I’ve Been Working On, Aside from Packing”