The Star Spangled Diamond Quilt continues to grow, albeit at a much slower rate than it did in Australia.  It’s funny how shaving two hours off of your kids’ school bus commute and having them be in sports again will do that, huh?  I’ve “lost” about four hours each weekday now that we’re back, which is twenty hours a week that I no longer have for crafting.  I’m glad they’re able to do sports again, so I try not to stew on the topic.  Ha ha.  My main job right now is raising my children, so it’s all OK.  Just think of all the EPP I can do at tournaments in the future, right?  😉

Alright, so I have thirty-six star units attached to each other, and I sewed up a strip of seven more star units to attach to one side in order to make things symmetrical.  (No idea why I did seven…I guess I was stressed about the impending move back to the States and it hampered my ability to count?)  So, that strip still needs to be attached.  Forty-three units right there.  My quick counting in my head of how many I’ll need to complete the top, now that I had to add that extra column, is eighty-eight units.  Oh, hey, look at that!  Almost exactly half right there in that photo.

I did uncover six more completed units, so to date I have made forty-nine of these things, with thirty-nine left to go.  Ha ha, I originally thought I would finish this in six months.  What an innocent.  And let’s not even think about the filler units that I’ll need to pop on the ends of those shorter columns and all the way up the sides, K?  Oh, this quilt. 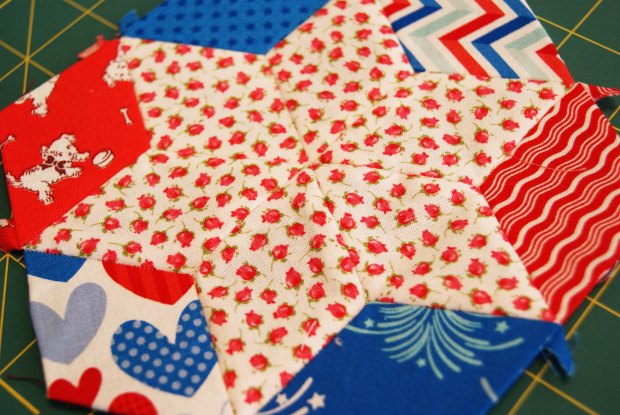 I’m quite pleased with this little unit; Junebug picked out a little fat eighth of the main fabric in Australia and so I think there will only be one that looks like this, and I love it dearly.  So cute!

10 thoughts on “Star Spangled Diamond Quilt, Back in the USA”