February 11, 2013February 1, 2015
It was during the week after Christmas–you know, when you’re fighting the urge to be sad that the big day is over, and you’re kind of euphoric with all the lofty New Year’s Resolutions to which you’re thinking about committing–that I found myself obsessed with the idea of throwing each of my kids their dream birthday parties in 2013.  We don’t do a lot of birthday partying in Brooketopia, mostly due to cost and logistics (newborn babies every two years will do that to you), but here we were going into a new year with no new babies…the idea sounded feasible.
Bluebird and I sat down to gorge ourselves do a little research on Pinterest birthday ideas, and we happened across a pin of a baking birthday party and she was awestruck.  Culinary celebration, commence!

First, we raided the fabric stash and picked out fabrics that somewhat coordinated with each other, and then I settled in for three weeks’ of sewing aprons for Bluebird and her guests:

Then we hurried about with all the other preparations (amidst all the ear infection fun we were also dealing with at the time) and Bluebird bounced off the walls as she counted down the days until her party.

…but first the girls had to stop and adore Baxter for a few minutes before I could entice them towards the birthday fun.  (After insisting they wash their hands after touching the dog.) 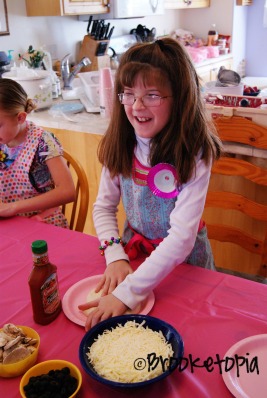 First, they made cupcake liner flower pins to adorn their new aprons, then we gathered in the kitchen to make mini pizzas for lunch. 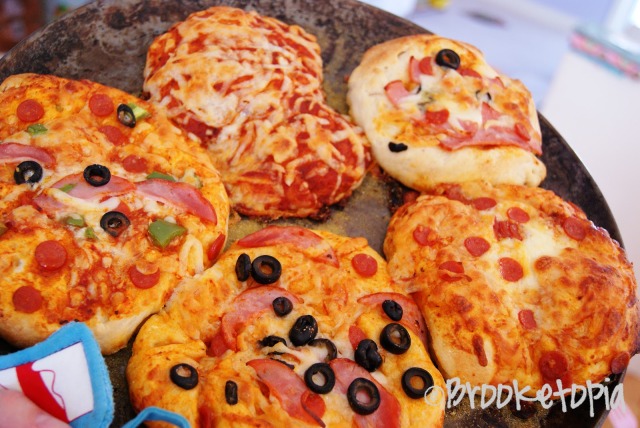 While waiting for the pizzas to bake, the girls made fruit kabobs which they then drizzled with milk and white chocolate:

I had hired two of the young women in our ward to help me out, and they cleaned up the lunch mess while the party girls watched Bluebird open her presents in the living room.  Then, while the party girls decorated cake boxes, my helpers finished tinting batches of frosting for the finale of the party: 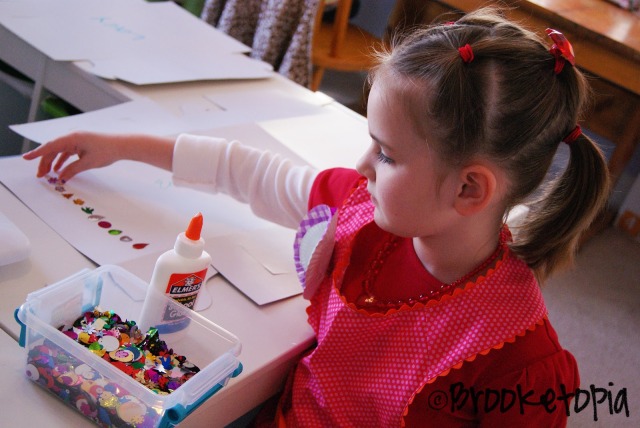 Man, a gang of 8-9 year old girls can pick up the basics of cake decorating pretty quick!  Candies, marshmallows, sprinkles…we had it all and they had a blast creating their own dream cakes. 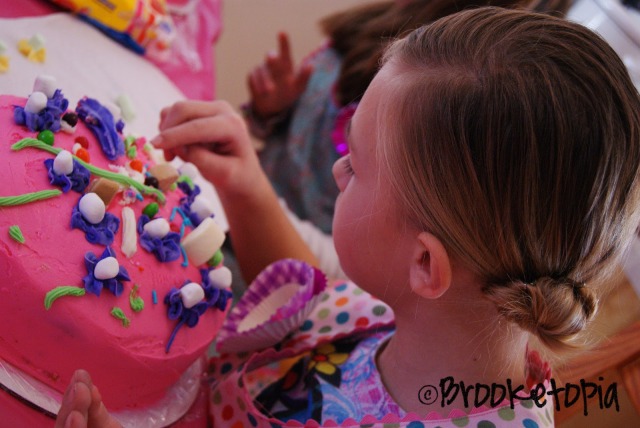 After decorating cakes, we sat down to enjoy Bluebird’s actual birthday cake, complete with raucous singing and laughing:

Hardly anyone wanted any cake after the candles were blown out because they had just spent the past three hours stuffing their faces with candy, pizza and frosting.  No biggie, just more left over for the other Brookelets when they returned home!

Nine years old.  Bluebird, you’ve been with us for almost a decade!  You bring me so much joy, and I’m happy to indulge your lofty ideas.  You are such a creative spirit and I look forward to fleshing out more of your big birthday plans in the future.