Continuing with the “Hey, I can make clothes!” theme, here is Bluebird’s new sweater for the winter.  She picked out the colors and requested the hearts along the bottom.

I knit up the gauge swatch during the last little bit of our trip home from Alberta and have since been steadily working on this sweater and only the sweater.  I stalled out when it came to knitting up the sleeves, but that’s just something I always do when making anything with sleeves.  I have to waste a week worrying about making the sleeves before going forward.  Every.  single.  time.

I ran into a problem with knitting monogamy about a week ago and seriously considered putting the sweater in the back of the closet and casting on for something quicker and more fun, but after two days of not being able to settle on a new “quick and fun” project, I hunkered down and knit on through the finish.  I’m glad I persevered. 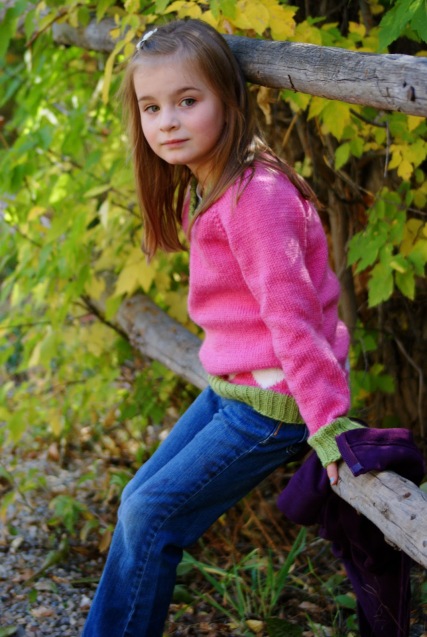 Bluebird, who has a reputation for being a tad lackluster in her reception of handmade goodies, has surprised me with her adoration of her new sweater.  We’re experiencing 80 degree (F) weather here, and when I presented her with the sweater she threw it on and wore it for the rest of the day, despite repeated inquiries about whether or not she was getting too warm.  After today’s photo shoot, she refused to take off her sweater until I noticed that she was sweating, after which I demanded she take the thing off. 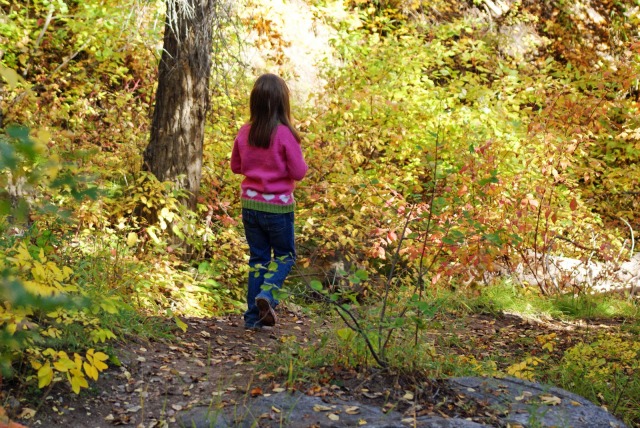 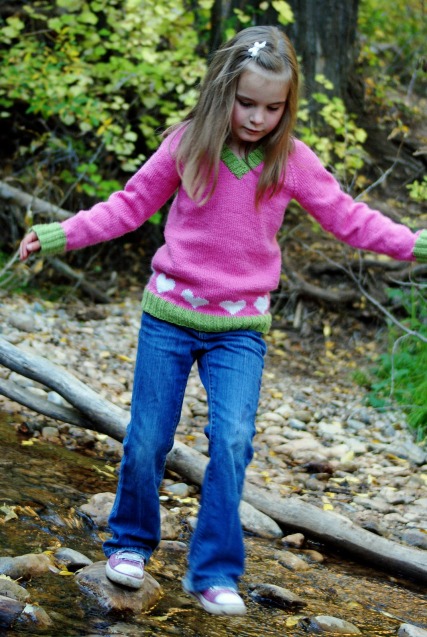 I’ve had a bit of mental anguish over the creation of this sweater.  Wool ain’t cheap and knitting ain’t quick.  I’m a homeschooling mother of four, and you can imagine how much excess money and time I (do not) possess.

However, I really wanted to make this sweater for my girl.  I’ve spent the past seven years honing this skill and all I have to show for it are hats and scarves and a few shawls.  I was ready to venture into the land of sweater knitting and use my creativity to bless my family in practical ways.  Penguin and Junebug jumped on the “Knit Me a Sweater” bandwagon when they saw I was making one for Bluebird, so I have two more sweaters to make before winter sets in…and I’m obnoxiously excited about knitting them.

When I am knitting, I sometimes feel a little guilty for embarking on projects that take up so much of my time.  Really, I could go to a clothing store and buy a sweater, which would take tons less of my time and cost me about the same amount of money.  But there’s something about making something rather than buying it that fills me with a deep sense of satisfaction.

I figure that anything that helps to make me feel good about myself is definitely worth pursuing, so swathing my family is handknits isn’t a waste but an investment.  Each day Bluebird wears this sweater I will feel proud of myself and she will feel loved because I let her pick the colors and then spent all that time making something for her.  If it was a sweater from the store, that positive emotional boost would not happen. 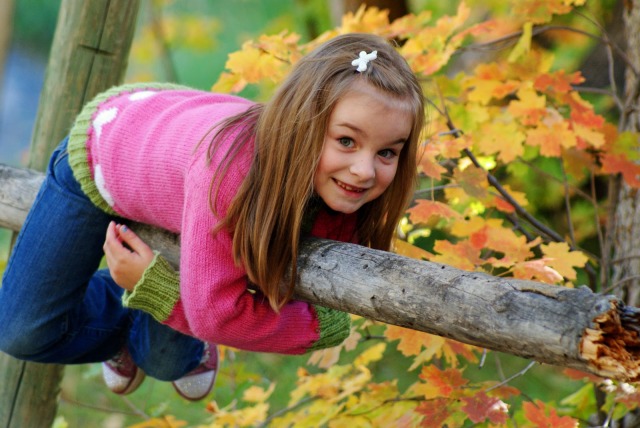 This sweater is meant for wearing throughout the coming winter as we embark upon our first year of homeschooling in our new schoolroom in the basement.  The coolness of the basement has been a blessing throughout this summer quarter, but will soon become a point of complaint as we move into the autumn and winter months.  It is my hope that Bluebird will feel warmed by my efforts to craft this sweater for her, just as I hope someday that her heart will be warmed by my efforts to craft her education.

I have been wanting to attend this festival for years upon years now, but something always came up that made it so I couldn’t go.  I wasn’t planning on going this year, but I woke up that Saturday morning and found that my afternoon was completely open.  Bluebird and Penguin had an Ice Cream Social to attend at church, and when it was over we drove on up to South Jordan to partake of some fibery eye candy.

A lady at the festival was kind enough to allow Bluebird and Penguin to pedal on her spinning wheel.  (Bluebird asked when she could have some fiber to actually spin.)  I only have a drop spindle at home, which impedes my spinning speed.  Someday I’d like to have a wheel, but I have to always decide between food, school supplies and hobbies.  Responsibility can be such a downer sometimes.

Penguin thought all the fiber batts should be called “snakes,” and would try to bite me with them.  I wish I had my camera ready when picked up a batt of silk blend, stopped short and exclaimed, “Hey, this snake is smoother than the others!”﻿ 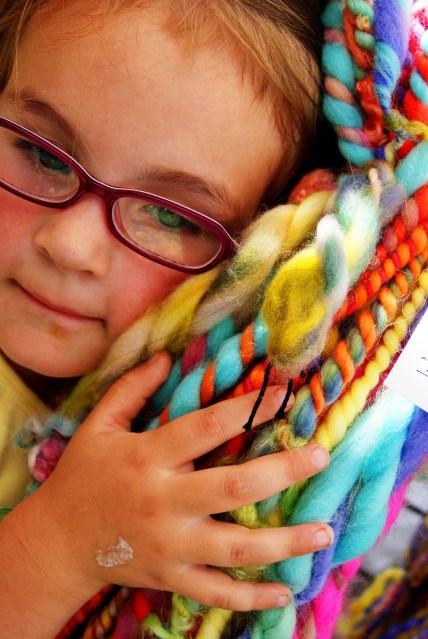 Penguin fell in love with this crazy handspun yarn, I wish I could have bought it and make a funky little hat for her!  She already has three hats though, so it would kind of be a waste of time and money.  Perhaps I can interest her in spinning in the future by showing her this picture and telling her that she can create her own yarn just like it!﻿ 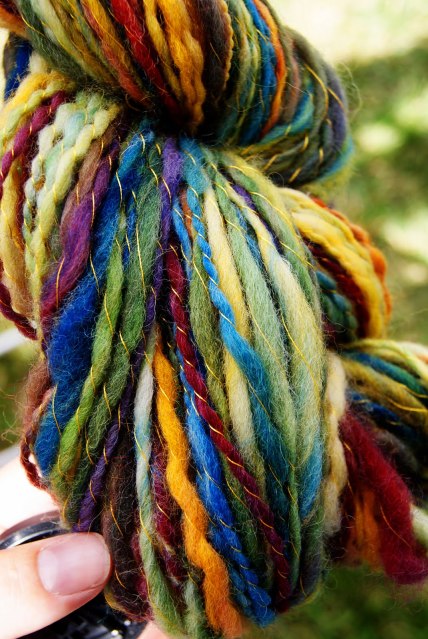 Bluebird was completely floored that you could make yarn with gold in it!

Stitch markers.  I thought they looked pretty on their black background.

Locks for spinning.  Oh, I wish I had more time for spinning, there are so many fun yarns one could make on their own! 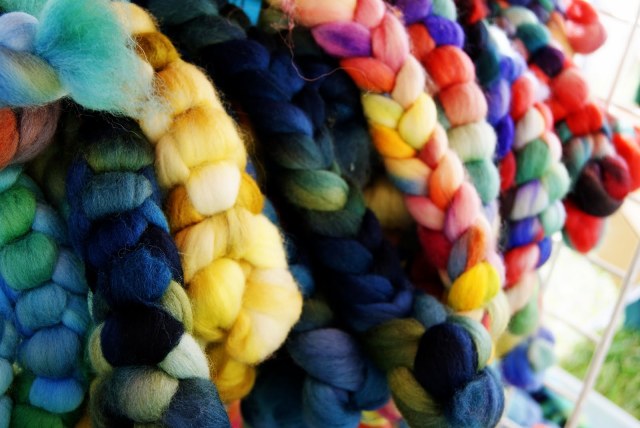 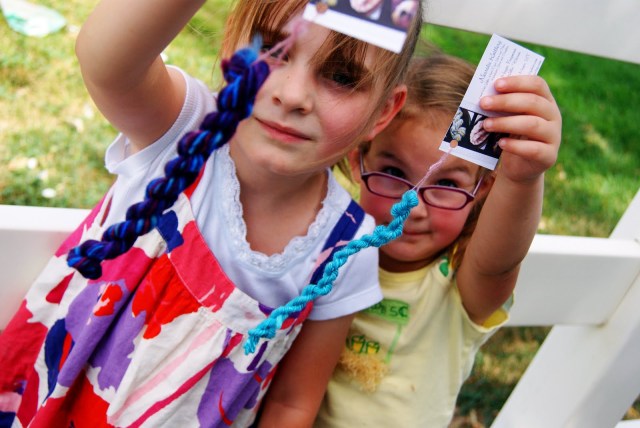 Sample yarn from the festival.  Bluebird named hers “Midnight” and Penguin named hers “Ocean.”  It’s funny when they lose them around the house because you’ll hear a voice squeal, “Oh no!  Ocean!  Where’s my Ocean?!?!”  Perhaps we can eek some doll hats out of the teeny skeins.

It was a fun little trip that allowed me to meander with my girls for an hour.  However, I might go by myself next year, as they meander faster than me.